A Short History of the San Jacinto Mountains 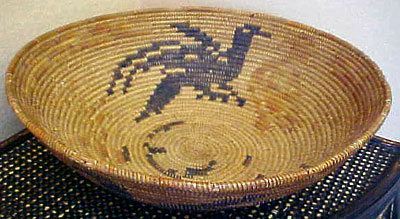 For at least 2,500 years before the 1860s, the only human presence in the San Jacinto Mountains was provided by Cahuilla (and possibly Luiseño) Indians from the surrounding valleys and foothills. San Jacinto and Tahquitz peaks hold a central place in Cahuilla mythology. Bands of Cahuilla used to camp in the high country each summer and fall, bolstering their winter food supplies by gathering and grinding acorns and hunting small game.

The 1852 Treaty of Temecula would have granted legal ownership of the entire mountain range to the Cahuilla; instead, its rejection by the U.S. Senate, under pressure from California officials, consigned their clans to scattered reservations. Pictographs on boulders and bedrock mortars near oak groves and creeks still testify to their former presence.

The earliest documented European entry to the San Jacinto Mountains came in 1860, after prospectors fanned out across the West in the wake of the California Gold Rush. After an initial press report that year, however, no significant discoveries materialized in these mountains. A flurry of largely fraudulent developments in the 1890s spawned the short-lived boomtown of Kenworthy in Garner Valley. A few mines, such as the Hemet Belle above Garner Valley, remain accessible to hikers today. 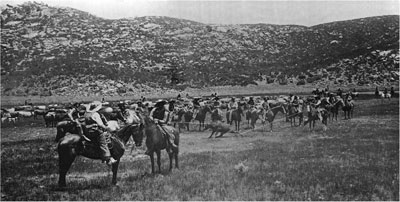 Adventurer, miner, and rancher Charles Thomas, seeking a place to graze cattle when the valleys below dried up, came upon what is now known as Garner Valley in 1861. He bartered with the Cahuilla for an informal right to graze cattle from his Temecula ranch. During the great California drought of the early 1860s, Thomas and other valley ranchers began to drive sheep and cattle into the mountains for summer grazing. Their destinations included Strawberry Valley, the site of today’s Idyllwild, and Tahquitz Valley, which lies high beyond the ridge that overshadows Idyllwild to the east. This practice died out in the 20th century with the settlement of Strawberry Valley and gradual enforcement of public-lands grazing regulations by the federal government. By then, a number of ranches in addition to Thomas’s vast holding were well established in the foothill valleys, and a few remain active today. 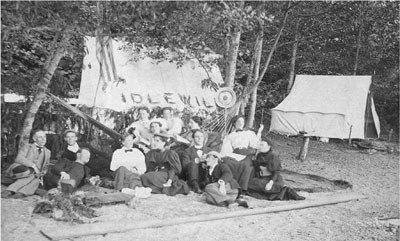 The presence of timber resources in the San Jacintos was widely known by 1872, but it took construction of the Southern Pacific Railroad’s Sunset Route through San Gorgonio Pass to draw the first logging crews into the forest in 1875. This enterprise at the site of today’s Lake Fulmor removed lumber for ties and locomotive fuel, but quickly folded as railroad construction moved eastward. Despite the hazards of bringing lumber down precipitous mountainsides, by 1878 several commercial loggers moved into both the nearby Fuller Mill Creek basin and Strawberry Valley, launching an industry that would spread as far south as the fringes of Garner Valley.

Although scattered operations continued into the 1920s, logging was ultimately doomed by federal creation of the San Jacinto Forest Reserve in 1897. Since 2001, there has been a modest resurgence of activity in and around mountain communities. This was triggered by federal support for forest thinning and salvage logging, to reduce the intensity of wildfires that might feed on a forest grown excessively dense, many of its trees killed by bark beetles.

Campers and Lodgers
By 1875 horseback traffic into the mountains was on the rise, leading to the construction of an entrepreneurial toll road connecting Strawberry Valley with Hemet. Although it mainly served loggers, stockmen, and a smattering of homesteaders, more and more campers began to use it, as well. In 1888, in response to lobbying by influential lumbermen, San Diego County cancelled the toll franchise. With the steep road now public, tourist traffic exploded.

The cleverest of the lumbermen was George Hannahs, who in 1889 branched out into managing Strawberry Valley’s first hotel. A year later he opened “Camp Idylwilde,” introducing the name that would eventually identify the valley. (As first postmaster of Strawberry Valley, Hannahs in 1893 named the settlement “Rayneta,” but changed it permanently to “Idyllwild” in 1901.) Other modest resorts quickly followed, offering a variety of organized recreation, along with lodging and dining or camping and groceries.

1901 saw a new level of commercialization, with the opening by Dr. Walter Lindley of the grand Idyllwild Sanatorium, an odd resort that vainly sought to finance treatment for

tuberculosis patients with revenue from hotel patrons. The medical aspect was quickly abandoned, and Lindley, who had a knack for publicity, persisted even after the structure burned down in 1904. It was reborn as the Idyllwild Inn in 1905 and remained the prime hostelry on the Hill for forty years. The advent of automobiles and of new roads from Banning and Hemet in 1909-10 heightened the popularity of “Idyllwild Among the Pines” as a summer destination, spawning the variety of camping, lodging and dining found here today.

Government Agencies
The single most crucial event to shape Idyllwild’s future occurred in 1897, when President Grover Cleveland, during his last week in office, created by proclamation the San Jacinto Forest Reserve. Since 1871, essentially half the mountain range had belonged to the Southern Pacific Railroad as part of its Congressional land grant for building the southern transcontinental line. Under the Forest Reserve Act of 1891, Cleveland’s proclamation required all as yet unsold railroad land in the new reserve to revert to the federal government. While most of what is now Idyllwild had already been marketed and remained in private hands, the surrounding terrain became public property. After creation of the U.S. Forest Service (USFS) and several subsequent reorganizations, the San Jacintos in 1925 became part of the San Bernardino National Forest.

By the turn of the century there was growing recognition that the San Jacinto high country contains Southern California’s prime mountain wilderness. But preservation of such landscapes was the business of the National Park Service. The Forest Service, in contrast, was created for “conservative” exploitation of the lands under its jurisdiction, to sustain productive watersheds and timber harvests. Bureaucratic competition was inevitable. As early as 1907, Idyllwild’s Walter Lindley stimulated a movement to create a national park or monument, a proposal roundly rejected by USFS. The State of California then complicated matters with a proposal from Riverside County leaders to create a State Park wilderness in the high country. Moving defensively, USFS itself in 1929 set aside much of high country above Idyllwild as wilderness, but the momentum for a state park was too great. After much complex negotiation and land-swapping, Mt. San Jacinto State Park was dedicated in 1937. To this day, despite the threat posed by the Palm Springs Tramway, the high country remains wilderness, protected cooperatively by state and federal governments. And Idyllwild’s character as an isolated mountain village remains intact, helped immensely by its being landlocked in the midst of this public domain.

Developers and Property Owners
The key event that would turn Idyllwild into the kind of town it is today took place in 1917, when a group led by Claudius Emerson bought the Idyllwild Inn and 1,000 adjoining acres. 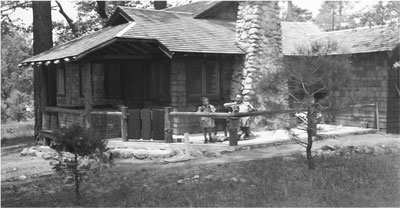 The Emerson family greatly expanded the resort aspects of the inn as a year-round destination, but more significant in the long run was their subdivision of the land holdings for sale as vacation home sites. (The IAHS museum was built on one of Emerson’s lots.) This created a local, if largely seasonal, resident population to lend stability and continuity to the community. Only a Great Depression could thwart Emerson’s genius, and in 1938 the bankrupted family lost the inn and left Idyllwild.

Emerson had gotten the jump on his chief competition, the Idyllwild Mountain Park Company, the prototype of Idyllwild’s future real estate industry and the firm from which Emerson originally bought his property. Owned by Frank Strong and George Dickinson after they bought out Walter Lindley in 1906, the company held 2,600 acres in the portion of upper Strawberry Valley known as “Fern Valley.” 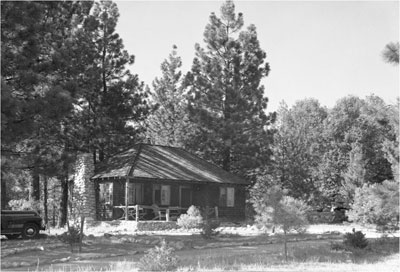 Only in 1923 did they get around to subdividing and marketing their tract. Most of the homes in Idyllwild today trace their origins to one or the other of each these large holdings.

Other Mountain Enterprises
In addition to its outdoor attractions for vacationers, Idyllwild became known in the course of the 20th century variously as a prime site for movie production and organized group camps, for its rustic furniture industry, and most recently as one of the “100 Best Art Towns in America.”

Cecil B. DeMille discovered Idyllwild in 1914 and began filming in Garner and Strawberry valleys, including among his earliest productions “The Girl of the Golden West.” At least 20 feature films were shot here during the 1920s, and it remained a retreat for Hollywood personalities for years after. In 1961 Elvis Presley came to town to film the musical, “Kid Galahad.” Village life still gets rearranged periodically by the activity of film crews. 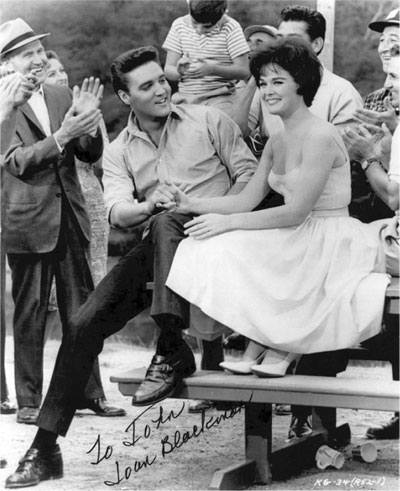 To give Idyllwild a broader community base, Claudius Emerson in 1920 began donating land (or selling it at bargain rates) to religious and scouting organizations, as well as to Riverside County, for use as organized camps.

Beginning in the 1930s craftsmen built and marketed rustic furniture derived from locally harvested timber. The preeminent line was Pinecraft, created by Selden Belden, but Woodland Craft by Ellis Griest was a strong competitor. Their successors were unable to sustain the business beyond the 1950s, but specimens can still be found in Idyllwild homes and at occasional garage sales.

Idyllwild’s world-wide reputation stems from two quite different pursuits: the arts and rock-climbing. Serious climbers in Southern California discovered Tahquitz Rock (also called Lily Rock) in the 1930s. Here they first developed the numerical system for gauging difficulty that became the standard in Yosemite and elsewhere. Today there are some 500 named routes up iconic Tahquitz Rock and its near neighbor, Suicide Rock. 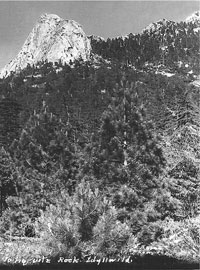 In 1950 the Idyllwild School of Music and the Arts opened, offering a wide variety of summer programs. It later was a branch campus of the University of Southern California for two decades, but was taken over in 1983 by a locally based group, the Idyllwild Arts Foundation. In 1986 the foundation launched the Idyllwild Arts Academy, the West’s only residential arts high school, which attracts highly talented students from around the world. A significant community of resident artists of all stripes has accumulated in Strawberry Valley, with galleries, plays, and musical performances now thoroughly integrated into the life of the village.

All activity here on the Hill has been chronicled for over 60 years by the local weekly, the Town Crier, founded in 1946 by Ernest and Betty Maxwell. As editor, artist, and activist, Ernie 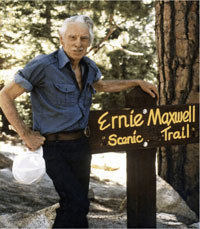 Maxwell played key roles in solidifying the community and, through his creation and leadership of a local chapter of the Izaak Walton League, preserving the mountain environment. Until his death in 1994 he was unquestionably Idyllwild’s dominant personality. His legacy is memorialized in the Ernie Maxwell Scenic Trail, the most accessible of the Hill’s pathways.